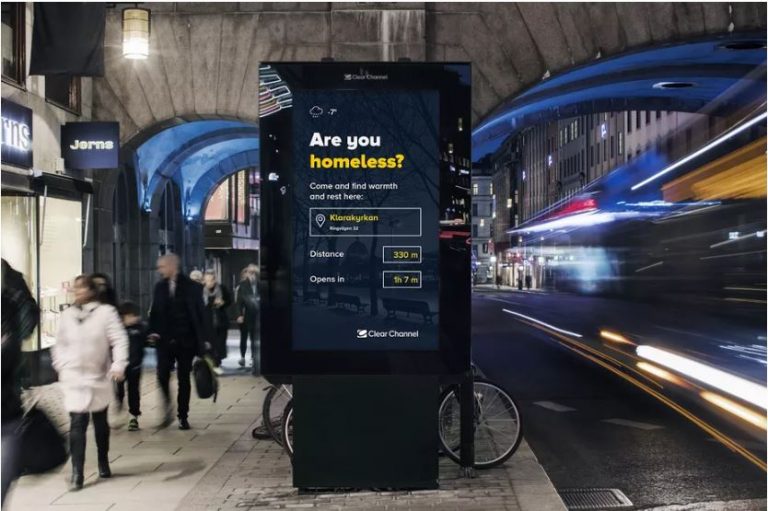 Across Stockholm, digital kiosks line the streets, their glowing screens serving as street-level billboards. Like those in many cities around the world, these digital screens are primarily used to display advertisements from companies who are foregoing the hyper-targeted world of online ads for the value of good, sort-of-old-fashioned physical world marketing.

This winter, though, Stockholm is putting its digital billboards to more altruistic use. Clear Channel, owner of Stockholm’s kiosks, partnered with the city government to develop an awareness campaign that replaces commercial advertisements with maps of local homeless shelters and information about how people can volunteer and donate.

On nights when the temperature dips below 19 degrees Fahrenheit, the city works with local churches and non-profit organizations to open emergency shelters, but, per the press release, “information about the establishment of the emergency shelters often does not reach the homeless in time.”

Through the new initiative with Clear Channel, on those coldest nights, a map of nearby emergency shelters will pop up on 53 billboards around the city’s busiest streets. Tapping into the billboard’s location data, the screens will display bold and easy to read directions to the closest shelter along with information about when the shelter opens.

Stockholm introduced the pilot program in December, and it will run through the end of January while Clear Channel decides if it wants to take the program to other cities in Sweden.

Previous Post
Someone You Should Know: High School Student Helps Color the Gap
Next Post
We Believe: The Best Men Can Be | Gillette