Someone You Should Know: High School Student Helps Color the Gap 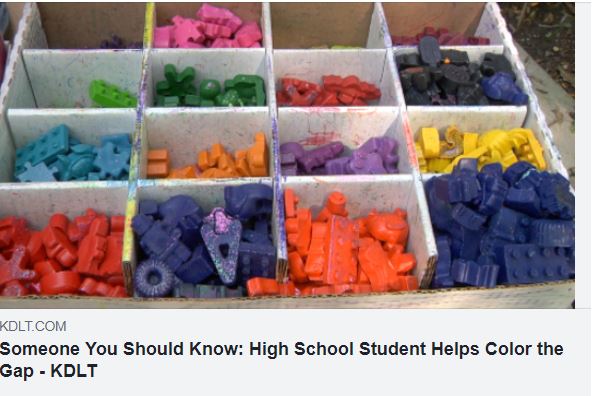 SIOUX FALLS, S.D.- A Sioux Falls High School Junior is proving that even something as small as a crayon can make a big impact. However, she’s doing more than just adding color to the community. She’s inspiring others her age to get involved. KDLT’s Miranda Paige tells us why Abby Neff is someone you should know.

16-year-old Abby Neff is making a difference one crayon at a time.

“There are a lot of you know just regular crayons and I thought it would be cool to make something new out of something used, that kids could use again and it would be brand-new to them,” said Abby.

The Sioux Falls Lutheran Junior started her non-profit organization, Recycled Rainbows three years ago after working as a teen teacher at the Washington Pavilion.

“Often times the kids would be disappointed that they had a project and they weren’t able to finish it when they got home because they didn’t have art supplies to finish them,” said Abby.

So she started collecting old crayons. Abby melts them down and molds them into new shapes.

Then she gives them to those in need. She calls it “coloring the gap.”

“I love seeing the kids reactions when they get the crayons. They are just so excited,” said Abby.

She isn’t just making an impact in Sioux Falls, but all over the world.

26 states and counting as well as orphanages in India and Africa.

Recycled Rainbows also has partnerships with organizations in the Sioux Empire like Sanford Children’s Hospital and Lifescape.

“That way they can use them in their therapy and it’s easier for them to do art.”

Abby says she feels proud to not only help those in need, but inspire other kids to get involved in their own community.

“It makes me really happy and it’s so important that kids know that they can make a big difference. No matter how small it may seem, they can change the world,” said Abby.

Her crayons are also used for attendance incentive programs at several schools in Sioux Falls. Kids earn a bag of crayons for things like good attendance. You can also get involved with Recycled Rainbows by donating leftover crayons at the Minnehaha County 4-H Office.

You can also get ahold of her on Facebook : https://www.facebook.com/RecycledRainbows1/